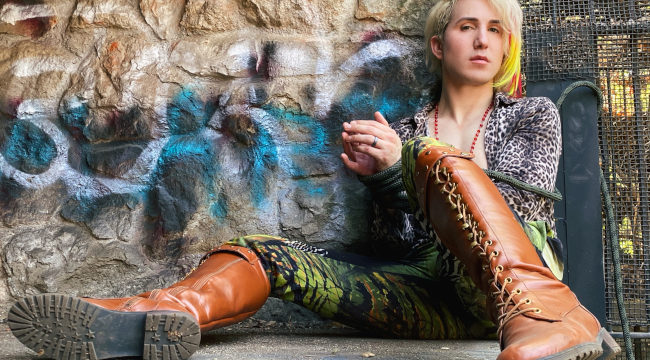 In addition, Ricky Rebel has launched the new “American Rebel Collection,” an array of new merchandise, at www.RickyRebelRocks.com.

The video was shot entirely on an iPhone 11 Pro during the Summer 2020 George Floyd protests / riots.

“It’s a song for all Americans. We are a nation of Rebels and we need to unify now more than ever. In the music video and song for ‘American Rebel,’ I wanted to express this feeling of being trapped that I believe all Americans are experiencing right now. We are trapped in our homes. We are trapped in our minds by the labels that we project onto ourselves and others which divides us and forces us to choose a “team.” No one likes to be labeled and be put in a box. This song expresses my mission to bring the right and left together. I have a little of both sides to my own personality, and in the end, we are ALL Americans. Realizing that and embracing the truth will ultimately heal hearts and set us free.” – Ricky Rebel

About Ricky Rebel:
THEN: In 1997, recording artist Ricky G. burst on the music scene as the lead vocalist of No Authority who toured with 98 Degrees, Destiny’s Child, Aaron Carter, Ashlee and Jessica Simpson among others. Rodney Jerkins (Whitney Houston, Jennifer Lopez, Britney Spears) produced their first album, “Keep On”, and Michael Jackson signed the band to his own MJJ Music custom-label at Sony. In 2000, they signed with Madonna’s Maverick label to release their namesake album. The album reached #18 on the Billboard Heatseekers Albums chart. Their signature hit, “Can I Get Your Number” peaked at #33 on the Billboard Top 40 chart while “I’m Telling You This” appeared on “The Rugrats in Paris” soundtrack. The band then embarked on tour with Britney Spears. Following the break-up of No Authority, Ricky became the lead vocalist of Harlow from 2004-2009 during which time he released “Unstoppable” (2005), mixed and engineered by Jay Baumgardner at NRG Studios and produced by Grammy-winning producer Randy Cantor (Ricky Martin).

Ricky also leant his voice to films including “Apollo 13” starring Tom Hanks, “Anywhere But Here” starring Susan Sarandon and Natalie Portman and the “Anastasia” soundtrack. In addition, he appeared on episodes of “American Dreams”, “Boston Public”, “Audrina” (Vh1) and starred in Debbie Allen’s ballet, “Pepito’s Story”, which opened at the Kennedy Center in New York City.

​​NOW: Ricky G. became Ricky Rebel and embarked on a solo career after My Chemical Romance invited him to co-star in their “NA NA NA” and “Sing” videos. In 2012, he won the Artist of the Year award at the RAWards and released his “Manipulator” album featuring the hits “Geisha Dance”, “Get It On”, “You Need a Woman” and the title track. MTV’s “Good Vibes” also featured music from the album. In 2013, “Geisha Dance” spent ten weeks on the Mediabase Chart, the chart that powers “On Air with Ryan Seacrest”.

In 2017, Ricky released “The New Alpha”, his follow-up album to “The Blue Album” featuring his Billboard Top 40 single “If You Were My Baby (Remixes)”, released on Audio4Play Records. The track includes remixes from world-renowned DJs Tommie Sunshine (Godfather of EDM) and Hector Fonseca.

Louder Than War, a leading UK music magazine, placed “The New Alpha” at #67 on their coveted Top 75 Albums of 2017 list and the Huff Post dubbed the album “explosive and compelling.”

Ricky took “The New Alpha” on the road with performances at the South By Southwest Festival (SXSW) in Austin, Texas, as well as a concert series in the UK and a performance at the Cannes Film Festival, Cinemoi Fashion Charity Concert in Cannes, France, to raise money for orphaned children. He also co-headlined “The Artist One Tour” with JAX (“American Idol”) and YouTube star Carl Chaze and performed with Alisan Porter, winner of “The Voice” (Season 10), at the American Influencer Awards.

Between 2015 and 2017, Ricky played with GRAMMY-nominated and GRAMMY-winning artists Kesha, Mya, Switchfoot, Patti Labelle, Colbie Caillat and Toby Keith as well as selected tour dates with O-Town, Blood On The Dance Floor and appearances at Matinee Las Vegas and Matinee San Diego.

In 2018, he performed at New York Pride on the Univision TV Network float during the annual parade that drew an estimated 50,000 fans with special guests including Lady Gaga. Ricky would go on to bring “The New Alpha” Summer Pride Concert Series to festivals in Los Angeles, San Diego and New Jersey.

“The New Alpha” album would also be considered by the GRAMMY Foundation for a GRAMMY Nomination and his hit “Boys & Sometimes Girls” was featured in the Facebook original series, “Queen America”, starring Catherine Zeta Jones.

The LOVELOUD Foundation invited Ricky and other celebrity guests to attend the LOVELOUD Festival, with headliners Imagine Dragons, at the Rice-Eccles Stadium in Salt Lake City, UT.

2019 began with a global buzz when “The New Alpha” music video was an official selection at the New Renaissance Film Festival in Amsterdam for best music video.

The next month, he was back in the USA to appear on the red carpet at the GRAMMY Awards followed by an appearance the next morning on FOX & Friends. ELLE magazine also named Ricky, as well as David Bowie and Madonna, to their Most Outrageous GRAMMYs Outfits in History list.

Following the GRAMMYs, Ricky toured Japan for the “Champion” concert series including the Global Village Festival in Fukuoka. In Oita, Japan, a tea ceremony was held in his honor with Master Watanabe Tsutomu, the top tea master in Japan.

When he returned to the USA, Ricky was invited to perform during the #DemandFreeSpeech Rally in front of the White House in Washington DC and the American Priority Festival at the Trump Doral in Miami with featured speakers including Donald Trump, Jr., and Sarah Sanders.

As 2019 draws to a close, Ricky is back in the studio in Los Angeles with GRAMMY-nominated producer and songwriter Gary Miller (David Bowie, Katie Perry, Cher, Kylie Minogue).

In addition, he is a fashion contributor to Us Weekly, supported by MAC cosmetics and signed to Revry TV the world’s first LGBTQ streaming platform. His Revry Original Documentary ‘”Rebels Only” was also nominated for Best Music Documentary at the Out Web Fest Awards.