Oh, did I say holiday season? I meant “the season in which consumers are barraged with advertisements of various products that they then feel compelled to buy, despite the fact that the majority of the products are both ridiculous and unnecessary.”

For the past 11 years, the most coveted toy for the holiday season has been, perhaps unsurprisingly, a Barbie doll. However, for the first time this year, Barbie has been bumped off of her throne in favor of a different doll: those representing Elsa and Anna, characters from Disney’s blockbuster “Frozen.” 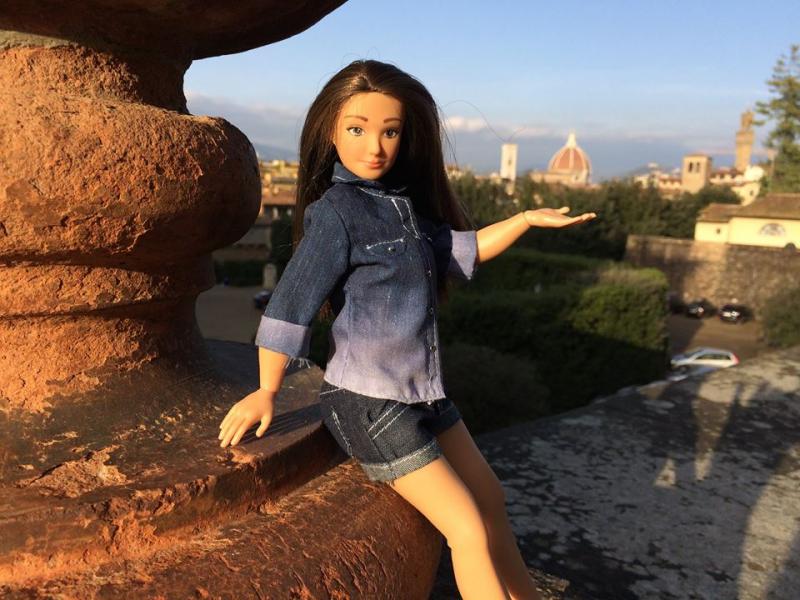 Not only is Barbie no longer the “toy most wanted” for the holiday season, her overall sales have dropped 21 percent this quarter, leading people to ask: is the world finally ready to kiss Barbie goodbye?

Nickolay Lamm thinks so. The graphic artist and researcher recently released the “Lammily” doll (yes, he named it after himself) that he believes may provide children with a better – and more realistic – alternative to the traditional Barbie doll.

According to Lamm’s website, where he sells the dolls for $25 each, the Lammily doll is “the first fashion doll made according to typical human body proportions to promote realistic beauty standards.” Apparently the doll was made to reflect the “typical” proportions of a 19-year-old woman, unlike the traditional Barbie doll – who, by the way, according to a study done by the South Shore Eating Disorders Collaborative, would not only fit the weight criteria for anorexia, but would also have to walk on all fours in order to move if she were real.

So, the Lammily doll is a little bigger than the Barbie doll in the stomach and hips, a little shorter and her feet are flat, instead of being perpetually molded to fit into high heels, all of which Lamm believes will help promote “realistic” ideas of beauty to those who play with the doll. He didn’t just stop there, though. For an additional $6, consumers can purchase a package of “Lammily marks,” a sheet of vinyl stickers portraying acne, cellulite, stretch marks, freckles, acne, glasses, stitches, scrapes, bruises, bandages, moles, mosquito bites, and grass and dirt stains. The stickers are removable so that children can customize their dolls and reposition and reapply the stickers as they see fit.

Lammily has some people pretty excited. In an article for Buzzfeed, writer Alison Vingiano called the dolls “pretty awesome… [because they] actually look like real women.” Michelle Longo, another writer, called the dolls “the next big thing” and “the hottest new toys of the season.” But, is this doll really worth all of this hype?

As far as I’m concerned, the answer is no. Absolutely not.

It’s fine if people connect with a more modernized version of a Barbie doll that has slightly larger proportions. It’s even better if someone feels truly better about their “flaws” or “imperfections” because a doll that they played with as a child portrayed them in a positive light. But, was this truly Nickolay Lamm’s motivation in creating this doll? Did he really want to positively influence women’s views on body image that badly? Or, is he simply one of many people and corporations that are cashing in on the recent “body positive” marketing movement?

Turn on the radio. Do you hear “Who Says” by Selena Gomez? “Firework” by Katy Perry? “Try” by Colbie Caillat? These are just some of the currently popular songs that celebrate positive thinking and self-image – or, songs that capitalize upon people’s insecurities to make money. Music is not the only area where “positivity” becomes income. Turn on the television, and take note of the types of commercials that you see. Have you seen, perhaps, the Special K commercial that shows women shopping for pants while store representatives measure them in size “radiant” or size “confident”? What about commercials from American Eagle’s teen lingerie line Aerie that market toward “real women” by featuring models that have not been Photoshopped or airbrushed? If you haven’t seen these newer commercials, you’ve probably at least seen Dove’s “campaign for real beauty,” launched in 2004, that features “real women with real bodies and real curves”.

With all of this talk about “realness,” let’s get real here: being body positive (or pretending to be) sells. Dove’s “campaign for real beauty” has almost doubled Dove’s sales since its launch ten years ago and has been called “one of modern marketing’s most talked-about success stories” by the Huffington Post. And, while Aerie Real and Special K’s “more than a number” campaigns have not yet markedly increased sales, both were created as a result ofdecreased profits, perhaps in an effort to save the company or bring their profits back to where they used to be. So, what’s more likely – that Nickolay Lamm selflessly created a product to benefit a demographic that he does not belong to, or that he is taking advantage of a fairly common marketing campaign to make money?

READ MORE: AerieREAL Isn’t Quite The Real Deal (Yet)

The Lammily doll seems really inclusive at first glance – but I challenge you to take a closer look to decide for yourself what Lamm’s motivations truly were for creating this doll. The doll purports to represent “real women”, but in everything except her proportions (facial features, skin tone, hair texture, and more), she is basically Barbie all over again. Lammily does not represent women of color, women with visible disabilities, women with curly hair, women with short hair, or women that may be heavier than what Lamm considers “normal.” Furthermore, the “Lammily marks” include “imperfections” as minute as mosquito bites but fail to include something as common as body hair – perhaps because Lamm is not really looking to challenge conventional standards of beauty as much as he is looking to make money for himself.

Lamm has maintained over and over that he did not create the Lammily doll to make money(which, incidentally, is exactly what I would do if I did create something like this to make money). And that could be true. Maybe Lamm had the best of intentions.

But, I challenge consumers to consider this product – that, I admit, looks really good at first – on a deeper level. I challenge consumers to consider the moral implications purchasing this doll and reinforcing that it is acceptable for anyone, particularly men, to profit on the insecurities of “real women”. More than anything, I challenge parents to actually do the work that it takes to teach their daughters to love themselves – scars, tattoos, acne, grass stains, mosquito bites and all – instead of leaving it up to a doll and a sheet of vinyl stickers.